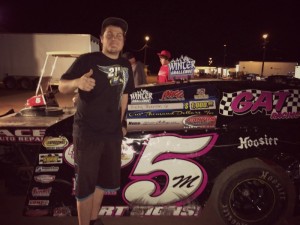 PEORIA, Ariz. (Jan. 30) – The folks at Bank of America in his hometown of Chandler have seen a lot of Ricky Thornton Jr. lately.

“I’ve been fortunate once to win nine in a row but never against the caliber of drivers I’m racing against now,” said Thornton, who kept the same setup that helped him to Jan. 25 and 26 victories.

From the sixth starting spot, Thornton made a move to the bottom groove in the second set of turns and was up to third by the time the first of 25 circuits was scored.

He caught Jason Noll for second a couple laps later and set his sights on Ward. Two cautions interrupted their run at the front, the second of which negated Ward’s pass for the lead.

Thornton went higher on the oval after that close call and while Ward threatened he was never able to catch Thornton again.

Canyon’s Winter Challenge Series resumes with $1,000 to win features for the Modifieds on Friday and Saturday, Jan. 31 and Feb. 1. The series then heads to Cocopah Speedway for Feb. 7, 8, 14 and 15 events.