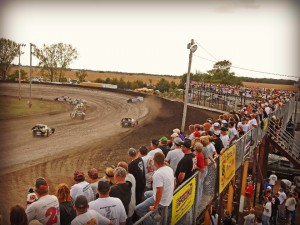 BOONE, Iowa – All roads will lead to Boone Speedway for the Sept. 2-7 IMCA Speedway Motors Super Nationals fueled by Casey’s.

More than 400 drivers from 22 states and Canada have already pre-registered and/or purchased pit stalls for the 31st annual version of America’s Racin’ Vacation.

“This is a good problem to have, and it seems like it’s one we ‘ve been having every year as long as I can remember,” IMCA Vice President of Operations Brett Root said. “I can’t emphasize enough how important it is for anyone who hasn’t pre-registered or sent in their forms for camping to do so as soon as possible. It speeds up the registration process immensely at the event and saves the racer a few bucks in the process.”

Car counts at Super Nationals have topped 800 every year since 2008. New event records have been set each of the last three years, with the 874 entries in 2012 setting the latest standard.

Depending on car count, more than $250,000 in cash and nearly the same amount worth of product contingencies will be awarded at Super Nationals.

For the first time in event history, engines will be awarded at Super Nationals, nine of them on the final night.

Hobby Stocks run for $600 to win and the same potential bonus as the SportMods.

The Late Model feature on Labor Day is part of the Deery Brothers Summer Series feature and will follow all tour procedures. The field of 24 will take the initial green flag two-wide.

Fans who can’t make the trip to Boone can catch the action from Super Nationals via the internet starting with the Sunday, Sept. 1 practice session, the performance by the band Helferstout and driver interviews on www.xsan.tv

BOONE, Iowa – A chassis builder synonymous with IMCA and the Modified division continues title sponsorship support for one of the most popular and prestigious events at the upcoming IMCA Speedway Motors Super Nationals fueled by Casey’s. Harris Auto Racing provides a portion of the purse to be paid out in the Modified Race of Champions on Saturday, Sept. 7 at Boone Speedway. The Boone manufacturer and high performance parts retailer has been sponsor of the event for 13 years and an IMCA sponsor for 24 years. Qualifying for the 12-car, 12-lap, $1,000 to win race is Thursday, Sept. 5 and is open to top drivers in local track standings competing at Super Nationals, former national, regional and Super Nationals champions, and to previous race winners. Two hundred and four different drivers from 24 states and Canada have qualified for the Modified Race of Champions since 1989. Jason Wolla of Ray, N.D., is the defending race winner. Harris is owned by IMCA Modified and Stock Car driver Kyle Brown. “With Harris Auto Racing being known [Read More]

BOONE, Iowa – Every driver in the four race of champions events at the IMCA Speedway Motors Super Nationals fueled by Casey’s on Saturday, Sept. 7 is a champion before they even take the green flag. The 31st annual Harris Auto Racing Race of Champions features a dozen drivers battling for $1,000 to win while the 18th annual Sunoco Face Fuels Race of Champions for Stock Cars pays $500 to win. The 11th annual Stephenville Starter Race of Champions for Hobby Stocks and BSB Manufacturing Race of Champions for Northern SportMods both pay $300 to win. Hobby Stock and SportMod RoC qualifying will be Tuesday, Sept. 3. Modified and Stock Car RoC qualifying is Thursday, Sept. 5. Drivers eligible to qualify for their respective events include former national and Super Nationals champions and race of champions winners, 2019 track champions/point leader or the second-place driver if the leader is not in attendance. Also eligible to qualify are former Modified (from 1993), Stock Car and Hobby Stock regional champions. One hundred dollars will be paid to the [Read More]