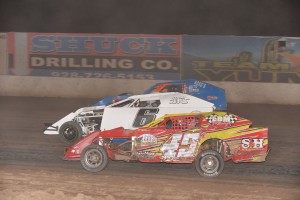 The same divisions are in action with the same points at stake Saturday, March 7, Friday, March 27 and Friday, April 10 at Imperial.

Seventy-odd miles of pavement separate the two venues. All four IMCA divisions run on regular race programs at Cocopah. Their three shows on the quarter-mile clay at Imperial are the only three sanctioned events currently scheduled there this season.

“The track here is very tacky and extremely fast. You can hammer down all the way around,” promised Geoff Dale, co-promoter at Imperial with Joseph Dalliwall. “We ran the modifieds on the quarter-mile here once last year with total success. The crowd loved them.”

Dale’s family had promoted the former Imperial Speedway from 1988-1995.

“We sanctioned our Modifieds in 1994 so IMCA is not new to us,” Dale said. “About three years ago, we got hooked up with the Heritage Foundation to raise money for the fairgrounds.”

California Lightning Sprints and California Dwarf Cars are also on the Saturday card.

The most recent sanctioned event for Hobby Stocks in California was held in 1994.