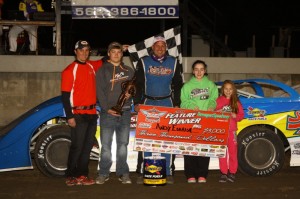 Eckrich raced from 17th starting to win the IMCA Late Model tour lidlifter, reeling in Matt Ryan midway through the 40-lapper and then holding off Justin Kay in a closer than comfortable final circuit.

Outside pole starter Ray Guss Jr. was pulling away from the rest of the field before a lap five yellow. After his car came to a stop, Guss needed a push to restart and lined up at the back of the pack.

That put Ryan at the front while Eckrich was into second by lap seven. Ryan held on 13 more laps before Eckrich drove by and then led the rest of the way.

Kay, who’d gotten together with Joel Callahan in an early incident that sent both drivers to the tail, was on Eckrich’s back bumper in the final set of turns but came up just short.

Also winner of the second “B” feature and the $250 Sunoco Race Fuels feature qualifier drawing, Eckrich had plenty of company in the quest for hard charger honors.

Kay had originally started 12th. Bruening advanced 16 places to fifth, Harris was a plus 13 in sixth, Callahan ended in seventh and Denny Eckrich drove from 20th starting to 10th.