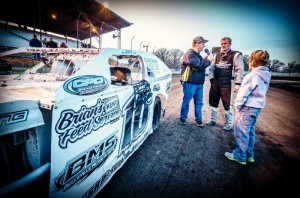 “This is my first $1,000 win. I’ve been trying to do that for a long time,” the new Fast Shafts All-Star Invitational ballot candidate said. “It was a good race. We had a good night. Everything worked out perfect for us.”
After winning his heat from the third row, Mills drew the inside row four start from the main event. He had the lead before midway of the 20-lapper.

Mike Jergens tried to stay close in the late going but had to settle for second. Dustin Smith, Tad Reutzel and Dan Menk rounded out the top five.

Kevin Opheim scored his 108th career IMCA Sunoco Stock Car victory. Ben Schultze topped the Karl Chevrolet Northern SportMod feature, Cody Nielsen was the IMCA Sunoco Hobby Stock win­ner and Nate Coopman collected Mach-1 Sport Compact career win number 91.
Also taking the initial green from seventh, Opheim had the lead 10 laps into the 15-lapper for Stock Cars. He survived a near spin after contact with another car, restarting at the front and lead­ing to the finish.
Chad Palmer and Randy Green both challenged before ending in second and third, respectively. Chris Palsrok was fourth and Dan Mackenthun ran fifth.

Schultze started second and led every circuit in the SportMod 12-lapper. Fastest in the first set of turns, he won ahead of Matthew Looft, Josh Larsen, Greg Sidles and Darrin Roepke.

Nielsen drew the pole and was scored first every time around the track in the 12-lap Hobby Stock feature.

Working the bottom line to perfection, he saw lapped traffic become a non-factor following a cau­tion just after halfway. Cory Weishaar, Malik Sampson, Austin Hauswirth and Craig Graham were next across the stripe.

Heat winners were Lange and Palmer.

Heat winners were Roepke and Looft.