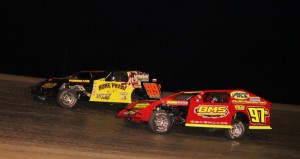 HAYS, Kan. (March 28-29) – More than 160 race teams from eight states made the trip to RPM Speedway for the season-opening Sunflower Classic and Jesse Sobbing and David Murray Jr. drove home with the biggest checks.

Each earned $1,000 for their IMCA Xtreme Motor Sports Modified feature wins at Hays. Both were already qualified for the Fast Shafts All-Star Invitational ballot.

In Friday’s opener, Jeremy Frenier started outside pole and stayed in front to lap 16, when Sob­bing got underneath coming out of turn four to take a lead he would not relinquish. Lapped traffic came into play but Sobbing held off Murray, who finished inches ahead of Cody Gearhart for se­cond. Frenier and Jeff Hunter rounded out the top five.

On Saturday, Travis Hatcher led the first eight laps before Dylan Sherfick and Murray shot past following a restart. As the field came out of four to the halfway mark, Murray got under Sherfick to take the top spot and drove away for the rich payday. Sherfick was second, followed by Gearhart, Taylor, and Hatcher.

Nichols made his move in lapped traffic to take the opening night lead and took the checkers ahead of Kyle Vanover, Nick Tubbs, B.J. Wagoner and ‘B’ winner Nolan Remus.
After a first lap mishap, the Saturday feature went 25 caution-free laps and Nichols made his way back to victory lane. Pole starter Angel Munoz finished second and Jason Rogers was third. Tubbs was fourth and Vanover ended in fifth.

Tyler Frye picked up where he left off last year as he got past Blaine Walt on lap 17 to win the 20-lap Karl Chevrolet Northern SportMod main event on Friday. Walt stayed close but had to settle for second, with Daniel Gottschalk, Ben Kates, and Jake Krone completing the top five.

Austin Carter shot to the top spot at the drop of the green in the Saturday show but Clay Money took control on lap nine and led the remaining distance for the trip to victory lane. Carter held on for second, followed by Walt, Cory Struckhoff and Brenden Damon.

Dillon Thompson started on the pole for Friday’s IMCA Sunoco Hobby Stock main and led all 20 laps. Chuck Madden chased Thompson most of the way but had to settle for the runner-up spot. Mike Traskowsky finished third, followed by Jason Fusselman and Kurt Hansen.

More than 40 Hobby Stocks checked in Saturday night. Madden started pole and swapped the early lead with Garrett Hager. The final half of the 20-lapper went caution free and set up an excit­ing finish.
As the leaders went into the final turn, third running Adam Armstrong shot to the lead and held on for another early season victory. Madden, was second while G.W. Fuller had the drive of the night af­ter starting 24th and finishing third. Fusselman and Jeremy Wagner rounded out the top five.

Hometown driver Kirk Pfannenstiel led all 15 caution-free laps in topping the Saturday show. Meyer finished second, with Kiowa Higdon, Smith and Herzog finishing out the top five.
The weekend’s race sponsors were Xtreme Motorsports and D & B Motors. The regular season at Hays will kick off on Saturday, April 12, at 7 p.m. with the school buses joining the regular divi­sions divisions in action.

Heat winners were Higdon and Herzog.