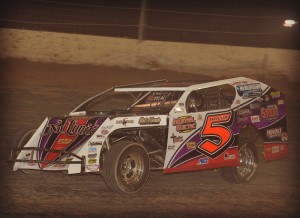 BATESVILLE, Ark. (March 20) – There was no shortage of out-of-state talent on the track but opening night honors at Batesville Motor Speedway’s Mid-America Modified Championship belonged to a driver from fairly close to home.

Jeff Taylor led the last four laps in topping the Thursday feature for IMCA Xtreme Motor Sports Modifieds. The $1,500 victory put him on the ballot for this September’s Fast Shafts All-Star Invitational.
He’d started third in the 25-lapper, fell back to fifth and then had to pass Jacob Murray, Spencer Wilson and Jared Siefert before setting his sights on Ken Schrader.

Schrader was making his first IMCA start of the season. The front two were running with lapped cars when they got together in an incident that saw Taylor emerge with the lead.

Completing the top five would be Schrader, Wilson, Richie Tosh and Siefert.

Taylor has now won feature events at three consecutive Mid-America Modified Championships, including a pair in 2012.