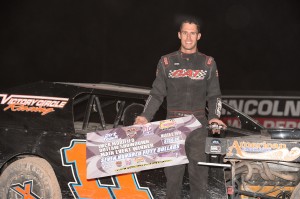 LAS VEGAS, Nev. (March 5) – Wednesday was a night of firsts for R.C. Whitwell on the half-mile Dirt Track at Las Vegas Motor Speedway.

Whitwell topped the first of four qualifying heats, then led all 25 laps of the IMCA Xtreme Motor Sports Modified feature on opening night of the FVP Outlaw Showdown.

The Arizona native and recent California transplant took the $750 checkers in his first night out in the Bill Henderson-owned Victory Circle ride.

Forty Modifieds ran at LVMS in the first of two midweek events. Josh Vogt, Kyle Heckman, Logan Drake and Brad Pounds rounded out the top five in the feature.

“The track was very racy. I ran the high side to the middle most of the way,” said Whitwell, after making his first non-Duel In The Desert visit to the Dirt Track, “and (teammate) Kyle ran a lower line. It was a pretty good night for us.”

Vogt made up ground as Whitwell negotiated traffic in the late going but ran out of laps.
The victory was the IMCA first of the season for Whitwell, who also ran third in the West Coast Late Model main at LVMS on Wednesday.

Modifieds race for a top prize of $750 again Thursday night at the Dirt Track.