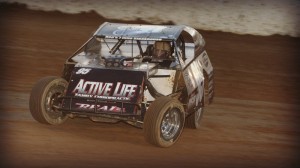 Dylan Smith returned to Cocopah Speedway to complete his four-race sweep of Winter Nationals, earning $1,000 for his Friday night IMCA Xtreme Motor Sports Modified win and $3,000 for the Saturday checkers.

“On Saturday I matched the total I won the first three races at Cocopah so it was a pretty good night,” said Smith, who will spend part of that bounty fixing his hauler, which broke down last Thursday in Arizona. “We raced with a lot of good guys down here. I hope we can keep winning races when we start racing at home in Nebraska.”

Smith won from seventh starting on Friday and from 10th on Saturday. The victories were his IMCA career 91st and 92nd.

Ward and Yeager had started to pull away from the rest of the field in Friday’s 25-lapper before Smith used the high line to reel the frontrunners in
.
Passing Yeager with seven laps to go and then Ward with five laps to go, Smith led the rest of the distance in a fast-paced contest that ran caution free.

“It was an exciting race and it got over quick,” he said. “You can’t ask for much more than that.”

Smith had his work cut out again for him Saturday after starting in the row behind Drake and alongside Sobbing.

Again using the high side, Smith passed Sobbing, Ryan Roath and finally Drake to gain the lead just eight circuits into the 30-lap feature.
The first of two cautions came just before midway, then second with four laps remaining. Drake tried to make his move on the bottom but couldn’t complete the pass.

More than 40 Modified drivers from nine states took to the track during Valentine’s Weekend at Cocopah.