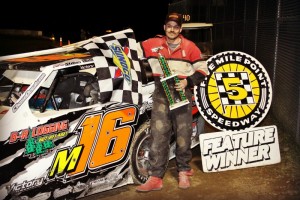 After avoiding early race collisions that slowed the IMCA Xtreme Motor Sports Modified finale, Wilmot raced from eighth to third before getting caught up by a spun car.

He restarted at the rear, used the high side of the oval to make his way back toward the front and was running side-by-side with Gary Roberts for the lead by the 15th of 25 circuits.

Finally pulling ahead, Wilmot beat Roberts to the $600 checkers by less than a car length. Matt Cole, Kevin Cole and Matt Jones rounded out the top five.

Dirt Works Eastern Region champion and former tour titleist Chris Fleming had the best shot mathematically at displacing Wilmot atop the standings but was slowed twice by trips to the pit to fix flat tires. He still managed to finish 11th.

The regular season champion at 5MP, Wilmot had also won the series opener there in April. He’d also prevailed in the Oct. 26 tour show at Black Rock Speedway.