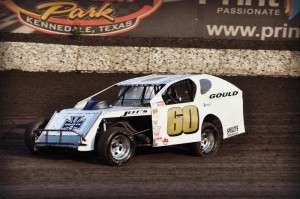 VINTON, Iowa (Oct. 8) – William Gould has won a lot of close races in his IMCA Xtreme Motor Sports Modified career, but few were as close as the one that made him a national champion.
The Calera, Okla., veteran edged rookie Jesse Sobbing of Glenwood, Iowa, by a razor-thin 1,233-1,232 margin to win the national IMCA Modified crown.

Gould was a 25-time feature winner this season, taking 24 of those checkers in his home Bills­Built South Central Region. IMCA’s first national champion from the Sooner State, he got the maxi­mum possible 40 bonus points for winning the track title at Kennedale Speedway Park and the Texas Lone Star Series.

Sobbing collected 32 wins in all, with 24 of them coming in the Belleville Motorsports North Cen­tral Region. He earned 38 bonus points for track championships at Shelby County Speedway and Crawford County Speedway.

“I’ve raced 18 years and this was the first time for points,” said Gould, who campaigned in a six-year-old homebuilt chassis and ended his campaign with a built engine from Karl Performance under the hood. “I’m proud to win the IMCA national championship and to be the first driver from Oklahoma to do it.”

“When we won the Lone Star Series, we knew we’d be getting at least 20 bonus points. If we won Kennedale, we knew we’d get another 20,” he continued. “About mid-July we realized we had a real shot, buckled down and concentrated on winning races. I take a lot of pride in this.”

Twice the Karl Chevrolet Northern SportMod national champion, Sobbing became just the third IMCA Modified driver to win both the regional crown and rookie of the year title in the same sea­son since 1993.

Ricketts was track champion and received 15 bonus points at Mountain Creek Speedway while Sessums topped the standings for 20 bonus points at Kennedale.
A 25-time winner during the regular season, Czarapata repeated as the top driver in the Arnold Motor Supply Northern Region on the strength of 38 bonus points from track titles at Luxemburg Speedway and Shawano Speedway.

Smith totaled 40 bonus points from championships at Algona Raceway and Buena Vista Race­way and won 34 features along with the Stephenville Starter Northern Region prize. Runner-up Shannon Anderson of Urbandale, Iowa, had 36 wins along with 34 bonus points from the Iowa State Fairgrounds Speedway and Stuart Speedway.

Carman, also the top rookie in the Southern Region, was a five-time winner. Champ collected Northern Region rookie honors along with 15 feature wins.
Webb won four times, Hickham topped three features while Cooney made his way to victory lane a dozen times.
Modified regional rookies of the year were Jerry Crowley of Fernley, Nev., in the Western; Doug Easterling of Rule, Texas, in the South Central; Colton Osborn of Lexington, Neb., in the Central; and Craig Ward of Owego, N.Y., in the Eastern.
Osborn had three wins, Easterling two and Ward one.
Scotty Pippert of Elberon, Iowa, won four times and was rookie of the year in the Northern Region for Stock Cars. Chad Reedy of Waco, Texas, paced the point race for Hobby Stocks in the South­ern Region.
Final point races for those seven divisions were held Sept. 29. National, regional, state and local point standings become official on Oct. 28.

Justin Kay of Wheatland, Iowa, was national champion and Randy Foote of Stanton, Iowa, was rookie of the year in the Late Models. The point season for that division concluded Aug. 25.
All champions and rookies of the year will be honored during the national IMCA awards banquet Saturday, Nov. 30 in Lincoln, Neb.