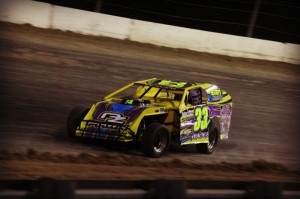 ROCK SPRINGS, Wyo. (Sept. 20-21) – Justen Yeager swept the weekend by winning two features in as many days during the Modified Fall Roundup special at Sweetwater Speedway.

That pair, along with Zane DeVilbiss, battled for the top spot before Yeager broke free with two laps to go and went on to collect the $750 winner’s share.

Donnelly, DeVilbiss, Casey Delp and Greg Scott were next across the stripe.

Yeager got to the front a little earlier during Saturday’s 30-lapper. From a seventh place start, Yeager worked around front row starter DeVilbiss on the fourth circuit, then drove away to the $2,000 victory and earned a spot on the 2014 Fast Shafts All-Star Invitational ballot.

The race, which was stopped for yellow once on lap two, went caution-free over the final 28 circuits.