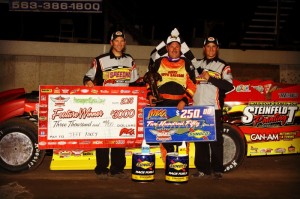 DAVENPORT, Iowa (Sept. 21) – Jeff Aikey raced to his tour-career leading 61st feature win and Brian Harris clinched his career first Deery Brothers Summer Series championship Saturday night at Davenport Speedway.
Aikey passed Justin Kay with eight circuits to go in the 40-lapper, then ran away from the rest of the field enroute to the $3,000 checkers.

Kay was runner-up to Aikey in the finale and to Harris in the point standings by 25 markers. Harris redrew 12th and fell back in the pack before driving all the way back to third. He’ll be rewarded for his season-long efforts with a $5,000 share of the series point fund during the IMCA national awards banquet in November.

Dan Shelliam took charge from outside the front row and led the first nine times around the half-mile oval. Pole starter Kay was in front when the 10th circuit was scored and then quickly into lapped traffic, with Rob Toland, Kay and Eckrich following.
The only caution of the contest came out on lap 17. Not long after the race went back to green, the seventh-starting Aikey found himself in second while Rauen, winner of the second “B” feature, cracked the top five.
Kay had Aikey on his tail when the two caught up with the back of the field again on lap 30. When Kay got caught behind the slower line, Aikey went to the high side of the track and into the lead.
He’d stretch that advantage out while Kay continued to run well ahead of Harris, who’d worked back up 15 spots to third and then outran Eckrich and Rauen.

Hard charger Tommy Elston was a plus 12 positions on the night to finish ninth. Harris and Rauen both advanced nine spots.

Harris led all drivers with five feature wins, including a record-tying four in a row, in 16 events this season. Aikey topped three of the last five features and now owns six career victories at Davenport.
Kay was also a three-time series winner this year. Darrel DeFrance extended his perfect attendance streak through the 27th annual series, finishing 17th in his 420th tour consecutive event.