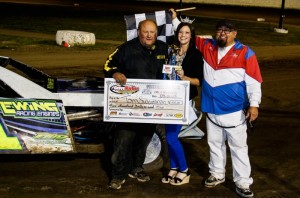 ELMA, Wash. (Sept. 14) – The Shipwreck Beads IMCA Modifieds had the race of the evening Saturday at Grays Harbor Raceway, with Tom Sweatman prevailing in a tight three-car tussle.

Jeff Foster initially had the car to beat but lost the lead after a restart just before the halfway mark. From there it would be a battle between several cars for the race lead.

The battle would not stop until the final lap when three cars went side-by-side all together coming to take the checkered flag. Sweatman, of Cosmopolis, was determined to be the winner for his first checkers of the season.

Chase Goetz would continue to flex his muscle in the USAC Ford Focus Midgets. The Hornets saw Jeff Daniel earn his fourth victory of the season.

Grays Harbor will be back in action on Saturday, Sept. 28. That evening will be the final points night of the season for the IMCA sanctioned Modifieds.