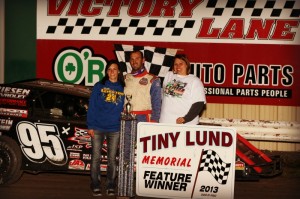 Just one week after Smith raced his way to victory in the 31st annual IMCA Speedway Motors Super Nationals fueled by Casey’s, Smith loaned his car to Bill Leighton for the Tiny Lund Memorial at Shelby County Speedway.
Leighton started inside of row two, which was also to the inside of Smith, who was driving a different car for the 22nd annual event.

Smith took the lead a handful of laps into the 30-lapper while Leighton ran back in fourth and fifth until the caution flag waved at the midway point.

Leighton went to work on the high side when racing resumed and started to challenge Smith before caution slowed action one more time with six laps to go.

Again working the top groove, Leighton pulled even with Smith as the two ran side-by-side over the final laps. Leighton raced the top side to victory a couple car-lengths ahead of Smith.

The $3,000 victory put him on the ballot for the 2014 Fast Shafts All-Star Invitational.
Mike Nichols drove to his fourth Tiny Lund title in the IMCA Sunoco Stock Car division.
The winner in 1996, 2004 and 2012, Nichols started inside of row three and ran much of the 25-lapper last in a five-car breakaway at the front of the pack.

Nichols started his charge to the front following a lap 15 caution when he was the lone front-runner working off the bottom groove. Racing one lane above his competitors, Nichols worked past Donavon Smith and Lance Borgman for third a short time later.
Another restart in the waning laps allowed Nichols to work to the outside of Keith Knop before pulling alongside leader Bill Osbahr. Nichols inched ahead of Osbahr at the line when the caution flag waved a final time with two to go. On the restart, Nichols pulled away from the pack to score the win.

From his pole position start, Doug Smith led all 25 laps on his way to victory in the Karl Chevrolet Northern SportMods.
Smith was pestered by Tim Rupp throughout the event and lost the lead to Rupp when the leaders encountered lapped traffic with seven laps to go.

A caution at the same time negated the pass and returned Smith to the point for the restart. When racing resumed, Smith drove away from the pack to score the win.

Anderson ran the low side while Dusty Van Horn raced the top groove to second. Despite numerous cautions that kept the field bunched together, Anderson survived to take the win by a comfortable 10 car-length margin.
Both the Stock Car and Northern SportMod features paid $2,000 to win. Anderson’s checkers were good for $1,000.
Feature Results