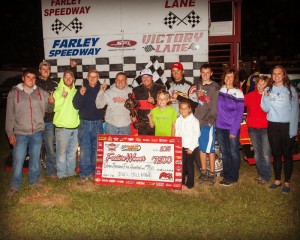 Callahan celebrated his 49th birthday with his career first Deery Brothers Summer Series feature win. The biggest payday on the 2013 IMCA Late Model tour was good for $7,500 and came during the Yankee Dirt Track Classic at Farley Speedway.

“There are so many good drivers in this series I’m just happy to be able to compete with them,” said Callahan, who got under Chris Simpson on the 33rd of 75 laps and then led to the finish. “We’ve been pretty good this year. We try to set our sights in Deery races to make the top 10, for the competition that’s out there.”

Simpson ran in front the first 32 times around the half-mile oval and ended in second. Simpson and Callahan were rarely separated by more than a couple car lengths; the only caution of the contest came on lap 52.

Callahan started racing at the age of 40 – hence his car number – and won regular season track titles this season at both Farley and Dubuque Speedway, sharing the credit for those and his Deery accomplishments with crew chief Stan Thomas and family.
He made his first Deery Series appearance in 2010 and had owned a trio of career-best third-place finishes, the most recent of them last month in Des Moines.

Fifty-three Late Models were entered Saturday at Farley. The 15th of 17 events on the 2013 series schedule paid a minimum of $500 to start.

Wrapping up the tour are $3,000 to win events on Friday, Sept. 20 at Independence Motor Speedway and Saturday, Sept. 21 at Davenport Speedway.

Friday’s program at Indee includes a $500 to win non-qualifiers feature.