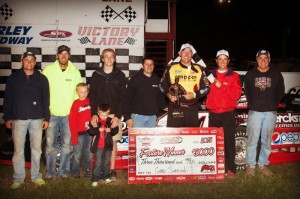 Chad Simpson raced his way from his “B” feature to the $3,000 checkers in the IMCA Late Model main event. A season-best 54 cars were entered in the Yankee Dirt Track Classic show, the 14th of 17 tour events this season.

Tommy Elston started on the pole and led the first 18 of 40 laps. Denny Eckrich ran second most of that time before catching Elston and running in front the next three times around the half-mile dirt oval.

That’s when Simpson took over. After winning the second “B” and starting 14th, Simpson shot into the lead on lap 22, just before the first caution came out.

He was running comfortably in front with the final yellow waved with three to go and bunched the field back up.
Eckrich got the better of Elston in their battle for second but neither could make up any distance on Simpson. Ron Klein and Jason Rauen completed the top five; Klein’s fourth place finish was his Deery career best.

It might have been Friday the 13th but Simpson’s luck was good at Farley: His right rear tire was flat when victory lane pictures were being taken.

Top prize for Saturday’s 75-lap Deery feature at Farley is $7,500. That race pays a minimum of $500 to start.
The series concludes with dates Sept. 20 at Independence Motor Speedway and Sept. 21 at Davenport Speedway.