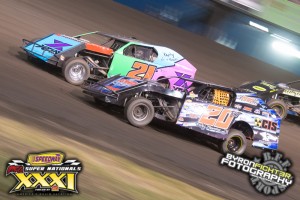 Ricky Thornton Jr. made the trip from Arizona and led all 25 laps of the first race, winning ahead of Keith White, Johnny Saathoff and Jesse Sobbing. Allen, from Texas, took the lead on the 14th circuit in the nightcap. He beat 14th starting Chris Abelson, Adam Larson and 15th starting Mike Jergens across the stripe.

Top four finishers from each qualifier will line up on the inside row of Saturday’s main event.

Thornton was unshakeable following each of four restarts. White moved into second to stay with 10 laps to go. Sobbing held onto the final transfer spot from the 17th circuit on. White and Sobbing both advanced seven positions.

Kevin Stoa and Eric Dailey did stints at the front of the second feature field before Allen worked his way by. Larson ran second the last half of the contest while Jergens dueled with Jimmy Gustin before gaining the fourth spot with two to go.

Four former Super Nationals champions were in the field for the second show. Jimmy Gustin was seventh, Stoa was ninth, Jeff Taylor was 19th and Richie Gustin was 24th.

Joining Thornton and Allen as first-time Super Nationals qualifiers were Jergens and the rookie Sobbing. Abelson and White are both in for the second time, Larson for the fourth and Saathoff for his 13th.