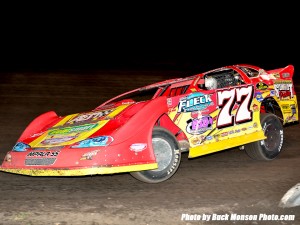 After working his way up from ninth starting to second, Aikey passed Jason Rauen following a lap 29 restart. He led to the finish of the 50-lapper, holding off challenges from Justin Kay and then Ray Guss Jr.

Guss looked to steal the lead away using the lower line with five laps left but Aikey made the higher groove work to perfection. He pulled away to win by six car lengths.

“This was a good race to win. It means a lot to me,” said Aikey, a 16-time Super Nationals qualifier and also champion in 1995 and 2004. “I knew Ray and Justin were back there but I had a lot of car tonight. It was awesome.”
Guss, Kay, hard charger Todd Cooney and Joel Callahan completed the top five. Guss and Cooney are both two-time Super Nationals champions; Cooney ended in fourth after starting 18th.

Rauen started outside Callahan on the front row and led the first 28 times around the track. Point leader Brian Harris was heading the pursuit of Aikey before going pitside after a frontstretch collision. He returned, restarted 21st and raced back to eighth.

Kay and Harris have been on fire this year,” said Aikey, also the Aug. 12 winner at Des Moines. “Any time you can pass them, you’re thumping.”