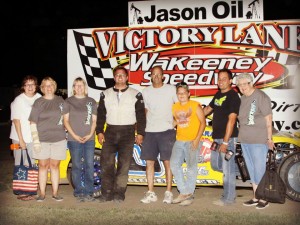 Kyle Rohleder has been close a couple of times this season to picking up a victory at his hometown track in the IMCA Xtreme Motor Sports Modified division. Sunday night he got it as he passed Tim Watts on lap 13 of the 20-lap caution free race and held on to the checkers to secure the win.

Brenden Damon also got his first win of the season at the 3/8-mile oval in the Karl Chevrolet Northern SportMod main. Damon took advantage of his outside pole starting spot and led all 15 laps enroute to the victory.

Clay Sellard made a late charge but could not make a pass and had to settle for second. Blaine Walt was third, followed by Daniel Gottschalk, and Clay Money.

Michael Smith got by Andrew Soderlund on lap eight in the 12-lap Mach-1 Sport Compact feature to score his first WaKeeney win. Soderlund held on to the runner-up spot, trailed by point leader Kirk Pfannenstiel, Monte Honas and Dean Herzog.

Jeff Tubbs continued his domination in the IMCA Sunoco Stock Cars as he drove to his sixth local feature win this season. Shannon Maughlin led the first six laps before Tubbs took control and went the distance in the 20-lap caution-free race.

All five classes will return to the 3/8-mile oval on Sunday, Sept. 15 for season championship night. Grandstand admission will be $5 for everyone and there will be a bicycle giveaway. The green flag waves at 6:30 p.m.