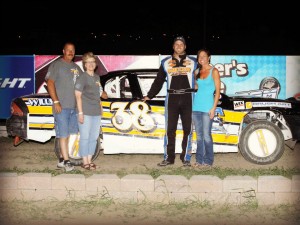 HAYS, Kan. (Aug. 24) – With just two regular season races left on the schedule at RPM Speed­way in Hays, KS, the points race is still up for grabs and drivers battled for position on Saturday evening August 24.

It was also the Greg Close Memorial Race with the Close family awarding $50 to a Hard Charger and a $50 mystery position in all five divisions.

In the Federated Auto Parts IMCA Modified feature, Dylan Sherfick took the lead on lap 12 of the 20 lap feature to score his second win of the year at Hays. Matt Henke led the opening lap before Rodger Peck assumed command. Sherfick then took the lead after the halfway mark to lead the field to the checkers.

The caution flag waved as often as the green flag did in the 15 lap Golden Plains Trucking IMCA Northern SportMod feature. Tracy Holloway led the opening lap before Tanner Portenier made a pass. Then on lap three, Portenier spun to bring out a caution.

Ron Wehling led all 15 laps in the Rebel Tank Service IMCA Hobby Stock feature to win his se­cond main event in a row. A few cautions kept the field close on the restart, but Wehling was able to hold off a hard charging Trevor Schmidt for the victory.

Drivers in the DK Ranch IMCA Sport Compact class may be calling ‘Dog, The Bounty Hunter’ as Monte Honas won his ninth feature in a row at the 3/8-mile oval. Honas took the lead from Kirk Pfannenstiel on lap four and led the remaining distance for the win. Pfannenstiel held on to se­cond, followed by Michael Smith, Dean Herzog and Shyla Hughes. Ed Jasper claiming the Mys­tery cash.

The school buses also competed with Darren Unrein getting his second win of the season.