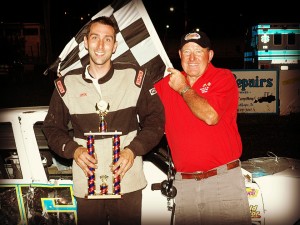 The most dramatic race of the night came in the Karl Chevrolet Northern SportMod feature. Mike Carlson started on the pole and grabbed the early lead before an early challenge from Phil Ricke as two went door-to-door for two laps.

The only caution of the race waved on lap six. George Nordman, who started 11th, weaved his way into contention for the final five laps to put the heat on Carlson.

Nordman patiently stayed behind Carlson until turn two on the final lap when he slid past on the bottom of the track and went on to the victory.

Carlson was second with Nick Meyer placing third. Shane Swanson was fourth and Ricke rounded out the top five cars.

Mick Monahan was the IMCA Sunoco Hobby Stock feature’s early leader before Philip Lusson wrestled the lead away on lap three. Lusson held the lead until lap seven when Wickman steered his no. 24W to front on lap eight and went on to the win.

The IMCA Sunoco Stock Car feature was run without a stoppage of action as Wiemann lead at the end of the first lap and held the lead throughout the 12-lap race to earn his first feature win of the year at the track.