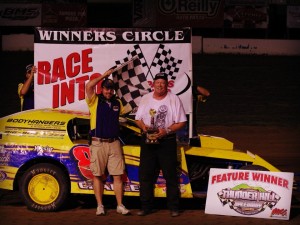 Charles started from the third row outside and by the fourth lap was out in front. He was challenged by Kurt Johnston several times but was not to be denied.

Johnston was the runner-up while Mike Petersilie put on a valiant effort after being put to the rear twice, passing more cars than any other driver on the track to end in third.

Kyle Olberding started the Belleville Motor Sports IMCA Northern SportMod feature from the fourth row outside and quickly set his sights on the lead. After fending off several other hard chargers, the race finished under a checkered-caution flag and Olberding made it to victory lane followed by Dusty Leonard, Brandon Mitchell, Bryan Rigsby and Curtis Dreasher.

Saturday’s events began with a tribute to a fallen friend and racer Tom Wunder.