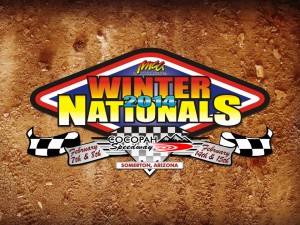 After running for $1,000 to win and a minimum of $100 to start their Friday, Feb. 14 feature, sanc­tioned Modifieds vie for a $3,000 top prize in the Saturday, Feb. 15 Winter Nationals finale.
Taking the green flag on Saturday pays a minimum of $300. Weekend events at Somerton also conclude the 10-date Winter Challenge Series and Ricky Thornton of Chandler returns to town with a 27-point advantage over Tim Ward of Gilbert in the race for that crown.

Karl Chevrolet Northern SportMods also run for $400 to win and IMCA Sunoco Hobby Stocks for $350 to win each night.

Pit gates open at 2 p.m. and racing begins at 7 p.m. both nights. Season pass holders, Skybox ticket and suite ticket holders will be admitted beginning at 3:30 p.m. The main gate opens at 4 p.m.

General admission is $15 for adults, $13 for seniors and military personnel, $5 for juniors ages 6-12, and children six and under get in free. Cocopah offers a Valentine’s special on Friday with admission just $5 that night for all ladies.