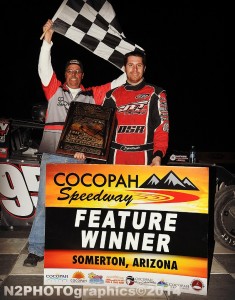 SOMERTON, Ariz. (Feb. 7-8) – Despite his lengthy record of success, Dylan Smith has never started a race season quite like this.

“It’s a great way to start the season,” said the former national champion and defending IMCA Speedway Motors Super Nationals fueled by Casey’s king. “I’ve never won right out of the box like this before. It was kind of different for me.”

Smith started Friday’s 25-lapper from outside row two and passed pole starter Kent Rosevear for the lead on the fifth circuit. Sixth starting R.C. Whitwell moved up to challenge on the inside before Smith took the faster lower line away.

After encountering lapped traffic with eight to go, frontrunners were forced to use all three grooves to negotiate their way through the field. Smith took the win ahead of Whitwell, Marlyn Seidler, Justen Yeager and Ricky Thornton Jr.

Yeager and Thornton both advanced 10 places from their spots on the initial grid.

Saturday’s Modified main at Somerton was 30 laps and after starting third, Smith led the last 22 times around the oval. He was catching up with the back of the pack and was forced to evade a spinning car that brought out the caution just before midway.

Smith again used the lower line to his advantage to drive through lapped traffic and collect his 90th IMCA career feature win.

All three divisions are in action again Feb. 14 and 15 for Winter Nationals finales. Friday’s Modified main pays $1,000 to win while Saturday’s checkers are good for $3,000. Both events are also 2014 Fast Shafts All-Star Invitational ballot qualifiers.