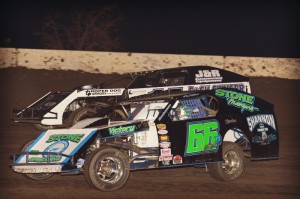 The IMCA Xtreme Motor Sports Modifieds and Karl Chevrolet Northern SportMods will see action on the 1/3-mile semi-banked oval on Feb. 23 before the first local track points are awarded on March 9.
“We had a terrific turnout with good car counts in both sanctioned divisions on opening night. We’ll race Sundays through Sept. 21,” noted promoter Jack Stanford. “There are Friday tracks within an hour of us and Saturday tracks half an hour away. We thought it would give guys a better shot at winning the region or even the national championship by running Sundays.”

“We’ve brought in all new clay, widened the track from 45 feet to 70 on the straightaways, added banking in all four corners and leveled the pit area to help water runoff,” he said. “I’m glad we were able to get the IMCA sanction this season. These classes are affordable and they’re very competitive.”
“We have a lot of tracks to share drivers with and we’re happy to be part of IMCA,” Stanford contin­ued. “I’ve supported IMCA since I started racing with them in 1999. The drivers have really backed me and we’re looking forward to continued success.”