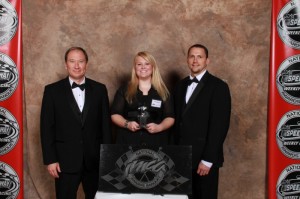 The IMCA Sunoco Hobby Stock driver not only earned her third straight Design 500 Lady Eagle title, but she added her first track championship and a qualifying run at the IMCA Speedway Motors Super Nationals fueled by Casey’s to her list of 2013 accomplishments.

The Lady Eagle championship is awarded to the female driver with the highest point total among all divisions nationwide.

“This year was a little more difficult than the previous ones,” admitted Bittner of her Lady Eagle title. “The competition continues to get stronger.”

While an increasing number of female competitors make that award more difficult to earn, Bittner stepped up her game in 2013 to also earn her first track championship at Albion Speedway.

“Jason Wilkinson runs at all of my tracks,” explained Bittner of her weekly wars with the multi-time track champion and former Super Nationals titlist. “It’s pretty amazing to get a title running against him but that’s always been my goal.”

Despite setting her sights on a local track crown, Bittner has never been one to closely follow the points.

At that time, her father and lone crew member Dale informed her that she had the title wrapped up as long as she started the feature that final night. She credits much of her success to his dedication.

“I couldn’t have done it without him,” Bittner said of her father. “He works so hard to make it possible.”

Bittner also spent time behind the wheel of a Karl Chevrolet Northern SportMod in 2013. She admits her seat time in that division may have helped her lock up the Hobby Stock title.

“It’s helpful to learn the track conditions as the night goes on when you race more than one division,” she stated. “Also, the SportMod was faster so I felt comfortable driving the Hobby Stock a little harder.”

Her third attempt at qualifying for the Hobby Stock dance at Super Nationals was the third feather in Bittner’s cap this season.

“I finally got it,” she said of her qualifying run. “I wish I could have done a little better in the big show, but qualifying was huge for me this year.”

Bittner raced to a pair of qualifying heat race wins at Super Nationals before fuel pressure problems relegated her to a 19th place finish in the main event.

As for 2014, Bittner said her racing schedule remains up in the air. The 23-year-old is studying business management and agribusiness and is in her final semester at Wayne State College.

“I really don’t know about next year. I plan to race the Hobby Stock again and want to spend more time in the SportMod to get better in that car,” she said.

With a laugh, she conceded, “It will depend on my job and entering the real world.”