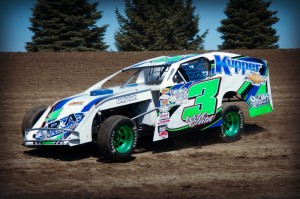 Travis Ulmer’s IMCA Xtreme Motor Sports Modified was the top recipient in voting to determine monthly contest winners. As a result, the driver from Mandan gets a complimentary 2014 competitor’s license from contest sponsor Sybesma Graphics.

“I’m planning to race at Dacotah Speedway here in Mandan and Southwest Speedway at Dickinson full-time, and once in a while Sundays at Nodak Speedway in Minot,” said Ulmer. “We’ll follow the Kup­per Chevrolet Dakota Classic Tour, too. I’d like to get at least 30-35 Modified shows in next year if I can.”

Ulmer had won the non-fendered class contest in May.

Sponsors were Kupper Chevrolet and Barney’s Tesoro, both of Mandan; Red’s Inspection, Perry Roof­ing & Contracting and R & A Lot Rentals, all of Dickinson; and Full Throttle Graphics of Clark, S.D.