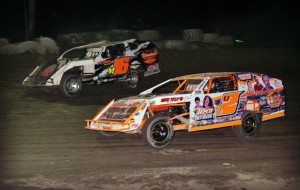 This Saturday night, he has the chance to go home to Windsor as champion of the 12th annual tour for IMCA Xtreme Motor Sports Modifieds.

Wilmot brings a 13 point advantage over Chris Fleming into the Nov. 2 series finale, during the National Quarter Mile Dirt Track Championship Weekend. The IMCA feature pays $600 to win and a minimum of $100 to start.

More information is available at the www.fivemilepointspeedway.net website or by calling 607 775-5555.