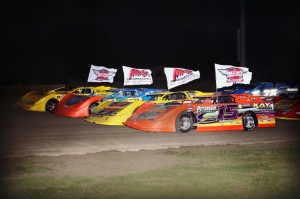 Brian Harris takes a 26-point lead over Justin Kay into the Friday, Sept. 20 event at Independence Motor Speedway, while Andy Eckrich is another 22 points behind in third and defending champion Jeff Aikey is another nine points off the pace.
The tour finale is Saturday, Sept. 21 at Davenport Speedway. Both Harris and Kay are armed with provisionals so they’re guaranteed to start both main events, as are Eckrich and Aikey. Both features pay $3,000 to win and a minimum of $300 to start.

One winning streak ended and another began in the July 2 Deery show at Independence. Harris had won a record-tying four straight features before Kay started a string of three straight with his first career tour victory that evening.
Kay’s next checkers came on July 5 at Davenport.

Pit gates and the grandstand open at 5 p.m. at Independence. Hot laps are at 7 p.m. with racing to follow. Winner of a special non-qualifiers’ feature for the Late Models earns $500.

Kids 10 and under get in the grandstand free each night when accompanying a paying adult. Pit passes for both shows are $30.
Independence last hosted two Deery events in a single season in 1993. Two series races, also including the finale, were held at Davenport last year.