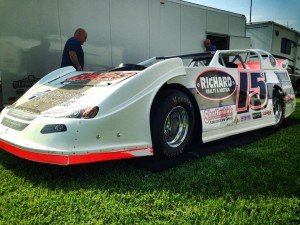 BOONE, Iowa (Aug. 27) – The winner of the next Deery Brothers Summer Series event will also be the first champion crowned at the 2013 IMCA Speedway Motors Super Nationals fueled by Casey’s.

The IMCA Late Model tour headlines the opening night program at Boone Speedway on Labor Day, Monday, Sept. 2. The feature pays $3,000 to win, plus a bonus of $30 for each of as many as 50 sanctioned starts made during the weekly point season, and a minimum of $300 to start.
All regular tour procedures will be followed at Super Nationals: Twenty-four cars will start the fea­ture and take the initial green flag two-wide.
Qualifying races are also on the Monday ticket for Hobby Stocks and Northern SportMods. Pit gates open and registration begins at 10 a.m., hot laps for those divisions are at 2 p.m. and the first heat race is at 3 p.m.

The 27th annual tour concludes with dates Sept. 13 and 14 at Farley Speedway during the Yan­kee Dirt Track Classic, Sept. 20 at Independence Motor Speedway and Sept. 21 at Davenport Speedway.