Front row starter Troy Gemmill shot out to a comfortable advantage and looked as though he had the car to beat early on.  The first caution fell on lap seven and Schott put pressure on Gemmill as the pack charged into turn one on the restart.

On the following circuit, Schott completed a big slide job on Gemmill in turn two to momentarily take the lead, but Gemmill countered with a crossover move to regain the point.

Lap nine proved to be disastrous for Gemmill as his no. 721 machine slowed to a stop. As a result, Schott inherited the lead for the ensuing restart.

Once the race resumed, Schott was untouchable as he drove to the $1,250 win and Fast Shafts All-Star Invitational berth by a comfortable margin. 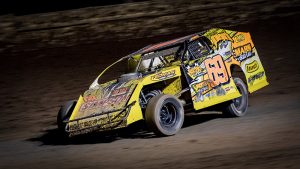 The IMCA Sunoco Stock Car main saw a last-lap pass for the win as Jason Rodgers edged George Fronsman by two one hundreth’s of a second for the victory.

Rodgers, who came from fourth, led only one lap the entire feature; the last. Aaron Spangler was third.

Conway made his bid for the lead with three circuits to go but just as he did so, the caution flew for a spin that occurred right in front of the leaders. Fred Ryland led the field to the green-white-checkered restart and immediately jumped out to a three car length lead.

As they came to the white flag, Conway pulled even with Ryland out of turn four and led by a half car length at the line. Conway completed the pass in turn one and drove away from Ryland on the final lap to steal the win.