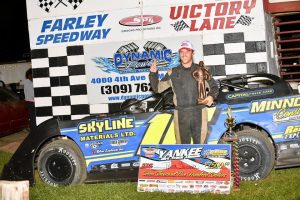 “It’s a huge honor to win this race. We think really highly of the Yankee,” said Bruening, who battled back and forth over second place with Chad Holladay much of the night and finally passed Matt Ryan for the lead following a late restart. “Anybody can win on any given night in the Deery Series. We’ve had kind of a dry spell so this win is pretty sweet.”

Ryan had started outside row one; Bruening took the initial green inside Holladay on row three.

“Obviously, everybody was worried about their tires and making 100 laps. This was a Yankee that was pretty unique,” said Bruening, who’d previously raced a handful of events at that distance. “I had my car dialed in and just concentrated on hitting my marks.”

“We used to race here weekly but have done more traveling this season,” he added. “We definitely still consider Farley our home track.”

As a bonus, the Saturday checkers extended Bruening’s advantage over Aikey to four points in the race for the series championship.

“I have a lot of fun racing with Jeff. He and his crew do a good job with their car and we do the same with ours,” Bruening said of his points duel with the seven-time Deery Series champion. “We race each other hard and clean. We’ve become pretty good friends. It’s been fun racing with him this season.”

Next up on the Deery Series schedule is the Thursday, Sept. 8 show at Boone Speedway during the IMCA Speedway Motors Super Nationals fueled by Casey’s.

The 30th annual tour concludes with another $2,000 to win feature during the Sept. 23 and 24 Ideal Ready Mix Liberty 100 at West Liberty Raceway.